Posted on August 12, 2018 by AYearOfBooksBlog 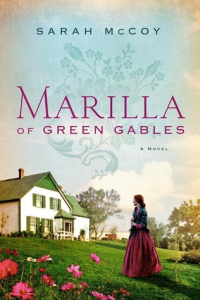 As a lifelong fan of the Anne of Green Gables series (written by L.M. Montgomery), I was thrilled to receive an advanced reader copy of Marilla of Green Gables by Sarah McCoy.  Thank you to William Morrow Publishers and Harper Collins for sharing this novel, for an honest review, which delves into the early life of Marilla.  This provides insight into her childhood, her adolescence and her young adult years, long before she adopted and was touched by the precocious, red-head, Anne with an “e”!

Fans of Anne of Green Gables will come to understand Sarah McCoy’s version of what led Marilla to her straight-laced, stern approach to child-rearing.  Readers are introduced to the 13 year old Marilla in 1837 as she awaited the arrival of her Aunt Izzy who had come to assist the family as they looked forward to the arrival of the next Cuthbert baby.

With the help of Aunt Izzy, Marilla learns to make red currant wine and hones her dress-making skills.  She is also influenced by her Aunt’s strong independent streak.  The young Marilla experiences a great loss, takes on household responsibilities and sacrifices her happiness and a chance at love due to her own stubbornness.

It was interesting that this character would be linked to the Underground Railroad.  This was an unexpected twist which I am still pondering.  The Underground Railroad led many slaves to freedom but I had not been aware of a Prince Edward Island connection.  It is intriguing to consider whether the proper Marilla would have become involved in this rescue and makes for a thought-provoking storyline.

Overall, I loved the book!  I have enjoyed rereading Anne of Green Gables and finishing the entire 8 book series so it was a treat to consider the experiences that had formed the severe but kindly Marilla Cuthbert.  In many ways, this book was an opportunity to reflect on a book that I had enjoyed in my childhood, much like revisiting Laura Ingalls in Caroline: Little House Revisited.

Marilla of Green Gables is the first book that I have read that has been written by Sara McCoy and I will be keeping my eyes open for her other novels.  I chuckled to read that her dog is named Gilbert – after Anne’s beloved tormentor (later her husband)!