Posted on February 11, 2018 by AYearOfBooksBlog 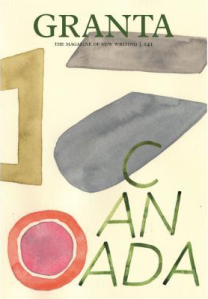 What is Granta you might ask?  It is the “magazine of new writing”.  Their website describes that “each themed issue of Granta turns the attention of the world’s best writers on to one aspect of the way we live now”.  Founded in 1889 and named after a river flowing near the Cambridge University, it is a quarterly celebrated for its’ themed issues.  Although it is categorized as a magazine, it is a really more like a book, an anthology or a collection of stories.

Thank you to Louise for sending me this gift.  I have enjoyed the first issue with short stories, poems and photo essays by Canadian authors.  Edited by Madeleine Thien (Do Not Say We Have Nothing) and Catherine Leroux (The Party Wall), I was moved by the first story, Mangilaluk’s Highway, describing the deadly trek of 3 boys escaping from residential school.  One boy survived yet has spent his life wondering why?

Lagamorph was a curious tale of a pet bunny submitted by Alexander MacLeod.  Parents can relate to the experience of a pet becoming their task and being much more work than initially anticipated.  The scene with the snake will be forever etched in my mind!

Margaret Atwood submitted The Martians Calm Canada which accompanied an original drawing by the author.  Her tale describes Martians accidentally arriving in Canada on their way to a musical in New York.  They encounter mushrooms who describe Canada to the extraterrestrials. In true Margaret Atwood style, she comments on the current events through her writing.

Granta is a magazine, an anthology really, that shares a unique mix of storytelling by Canadian artists.  A few of the entries were very creative head scratchers.  I am not sure what to make of them and was happy that they were short but these were mixed in with some great writing.

Overall, Granta was a collection of writing to read a little bit at a time, to slowly enjoy and to appreciate the creativity of Canadian writers.  I am looking forward to the next collection which is called Animalia.

Like Loading...
This entry was posted in Canadian and tagged Granta, Granta 151, Granta Canada. Bookmark the permalink.