Posted on November 17, 2017 by AYearOfBooksBlog

It was a fantastic evening with Rachel Cusk, Ed O’Loughlin, Michael Redhill, Eden Robinson and Michelle Winters at the Scotiabank Between the Pages Giller Prize event.  Koerner Hall was packed with book lovers, anxious to hear about the novels and the author’s writing experiences, on November 6th.   The Giller Prize is affectionately known as the “Oscar’s of publishing” and will be held on November 20th… I sure wish that I could score a ticket to that event!

The Toronto Between the Pages event began with a reading by each author followed by a panel discussion.  At the time of the event, I had finished 3 of 5 books so was familiar with many of the readings.  I was glad that Eden Robinson read from the latter pages of Son of a Trickster as the language at the beginning might have been a shocker for some of the crowd but I am sure many enjoyed her joyous laughter!! 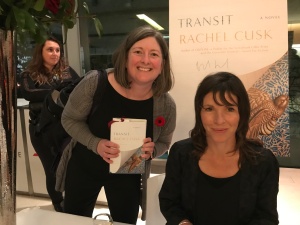 This author visited from London, England and has written 9 novels including Outline (which I had recently reviewed).  She talked of her book challenging conventional ideas and likes the “freedom to represent what is in my head”.   It was remarkable to learn that she plans out the entire book in her head as she has “to know everything in the book before writing it down” .  That is certainly a unique approach to writing!

She shared that her imagination was stoked in childhood when she and her siblings faked their own deaths and staged a burglary (complete with tying themselves to chairs), landing her a long time on the nautghty step!

Although I have read articles discussing the autobiographical nature of the books, Cusk shared that it “annoying to have people think it is an autobiography”.  Her writing is smooth and thoughtful but whether it was nerves or a discomfort with the audience, Rachel struggled to share her thoughts on stage.

Ed O’Loughlin – The Minds of Winter

This is a novel that I am yet to begin (perhaps this is a sign as I still have last year’s winner, Do Not Say We Have Nothing by Madeleine Thien on my too be read shelf)! Ed O’Loughlin is an Irish Canadian novelist.  He read the first few pages of his book which is set in the North West Territories and took 4 years to write.

As a child, he was fascinated with explorers and devoured a picture book about the doomed Scott expedition.  He described himself as an awkward child,  “a bit of a loner”, who read a lot of books while growing up in the countryside.   He began writing as a journalist, spending 8 years in Africa having a great many adventures but as he began to burn out, secretly wanted to write a novel.  He started writing a novel but after 8-9 months realized he was “going to starve” so got another job describing news paper writing as “fish and chips” as it is gone the next day.  When asked about why he writes, he laughed that he is “not much good at anything else”.

O’Laughlin spoke about the in-depth research and how he enjoys learning about the past.  He only reviews non-fiction and shared that “I don’t necessarily like a lot of fiction” yet it is “hard to find a non-fiction so bad that you don’t learn from it”.

This was the second time that I have met and heard Michael Redhill speak (Grimsby Author Series).  As a novelist, poet, playwright and former publisher, he brought a sense of humour to the stage.  He shared that his book is about the “many things that challenge the sense of self and the question of who am I not”.

Michelle Williams had described that she writes with feeling of anger and he joked back at her that he writes from “pure rage” when he starts writing after becoming obsessed with an idea.  He had been inspired by sitting in Bellevue Square and watching “the passing parade” and had thought “what if my own twin walked into the park”?

He described himself as a “dangerously ugly child” with a sever overbite who would have to be careful if he sneezed hard “not to bite my own chest”.  He laughed that he had been “locked in a room with books” and that he was “shy, awkward and booky”.  He loved the fantasy of Tolkien and Lloyd Alexander and had support for his writing although he was told “it is nice you are writing poetry but get an education”.

Eden Robinson – Son of a Trickster 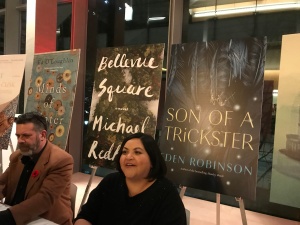 I had not forgotten Eden Robinson’s infectious laughter!  She visited Laurier University where I had first heard her speak and had my copy of Son of a Trickster signed.  Her robust laughter filled the stage as she described how the magic in her book was “supposed to be a bystander but it wanted to participate very badly” and that despite having a plan, note cards and structures in place, she “realized it was not where the book is going to end up”.

Robinson described herself growing up as “emo”, moody and the eldest of her siblings.  She noted that she spent her teen years in her bed room, with the door locked, writing “pungent poetry”.  She came from a family who loved to read and she would follow her parents around the house reading out the funniest bits of her book, laughing.  Her parents had grown up with out a lot of opportunities so were enthusiastic and embraced her goals to be a writer.

When writing, she describes the first draft as may to write but struggles with the second draft, writing scenes that she had avoided writing and often breaking down to tears.  She “just loves” writing and admitted that she would write even if she was never published.

Michelle Winters – I am a Truck 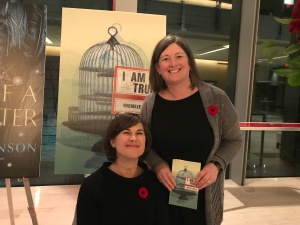 Michelle Winters was the lone writer who still has a day job.  She spoke of the way “some weird stimulus can bump you into action”.  As mentioned above, she writes, starting with a feeling, very often rage, writing the things that you wish you could change “since the world is hard”.  She described how frustrating it is, walking to work and seeing people already on their phones, already working and she thinks “what are you doing”?  It is just normal life which she finds outrages and “can whip myself into a frenzy”!

As a child, she says that she was defiant, and pushy, even campaigning to call her parents by their first names at the age of 6!  Four years later, she had written a story about an unintentional stabbing stating that “sometimes they just happen”.  At 20, she was writing in hopes to change gender relations and now loves the “feeling of power you get from writing” as it is a chance of “imposing my will on a world I can’t change”.  On the stage, she was confident, bold and seemed comfortable despite the audience and the excitement of being short listed for a Giller prize!

At the book signing part of the evening, I enjoyed having a chance to talk to Michelle Winters.  I was curious about the title I am a Truck and she shared that she wanted to have a vehicular and musical theme.  I am a Truck is a country song which she had heard and thought it was the perfect title.  She did not say who the artist was but I am guessing that this might the song which came up in a search.

Overall, the Between the Pages event was FANTASTIC and I would urge any book lovers to join me next year in the celebration of great Canadian authors.  Which book do you think will be this year’s winner?  will you be watching the event?  Please add your comments below. 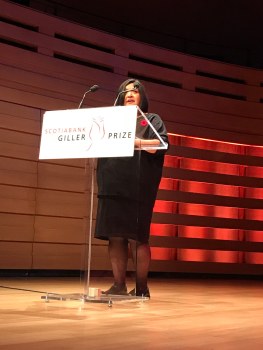 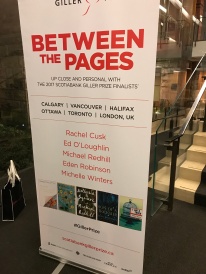 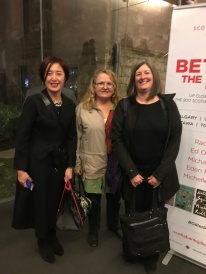 9 Responses to Between the Pages Scotiabank Giller Prize Event