Posted on October 8, 2017 by AYearOfBooksBlog 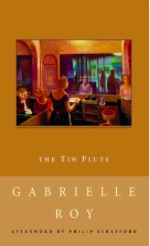 The Tin Flute was the Quebec book for my Cross-Country reading challenge.  This book has been on my TBR list for a while as I slowly read through the CBC’s 100 Books that Make You Proud to Be Canadian list.  It was the winner of the 1947 Governor General award and is a grim and gritty story that followed a girl, coming of age in an impoverished family.

Florentine feared being trapped in a life like her parents.  The French Canadian couple moved frequently to escape the landlords looking for rent and struggled to support their large family.  Florentine dreamed of a different life as she formed relationships with boys heading off to war.

Although it was not a happy story, it gave a vivid picture of what it was like, living in the poverty of Montreal’s St. Henri as the depression ended and war began.  It was a slow read but one that leaves the reader pondering the challenges of living in this era.

Gabrielle Roy was known as “one of the great contemporary writers on the human condition” (Canadian Encyclopedia.ca) and was awarded the Order of Canada in 1967.  Sadly she struggled with bouts of depression and died of a heart attack in 1983. 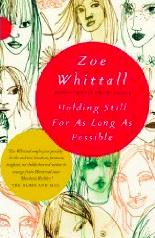 71.  Holding Still for as Long as Possible (Zoe Whittall)

Zoe Whittall was highlighted after being short-listed for the Scotiabank Giller Prize in 2016 for her book The Best Kind of People.  As part of a summer challenge, I chose to read Holding Still for a Long as Possible with the theme of the LGBTQ community.

This was a book that I had difficulty relating to and sadly, I think it was related to my age.  The characters were in their mid-twenties and the book focused on their social lives, running off to bars and parties.  As a busy, working mom, it was difficult for me to relate.  I also struggled with the description of paramedics and how the one character would text his girlfriend details of the cases that were picked up which in reality, would be a huge privacy breach.

Overall, I was glad that this was borrowed from the library and I enjoyed The Best Kind of People more. 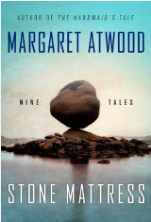 Although I am not a huge fan of short stories, I am a huge fan of Margaret Atwood!  This collection of short stories was enjoyable and a huge departure from the age group described above in Holding Still As Long as Possible.  This collection focused on the challenges and day to day issues for older adults.  A few of the stories were linked and there were some surprises!

My favourite story was Stone Mattress which told the tale of a sly senior citizen getting revenge on a cruise to the Arctic.  This senior meets a man that had date raped her as a young girl, leaving her disgraced by her family and pregnant.  Years later, he did not even recognize her and she devised a plan of revenge fitting the rugged terrain.

After reading a few Atwood works this summer, this collection of short stories shows the diversity of her writing and I hope that more Canadians will enjoy her writing!

The Piano Maker was a surprise 5 star book.  I discovered this author as part of the Canadian summer reading challenge by the County of Brant Library.  I had never heard of this author and am sure glad that he was square a on the Bingo Card.

This story followed a woman who arrived in a small Canadian town in a swirl of mystery and gossip while she keeps the community spellbound with her beautiful music.  The piano in the parish was built by her family and as she plays the treasured instrument the history of the family business is shared.  The reader learns of the plight of this woman and her family as they fled the dangers of the Great War.  Almost destitute, a widow and mother Helene travels to Canada and becomes entangled with a man from the past and his questionable business of selling sourcing and selling artifacts.

This novel has love, danger, war, suspense and death.  It was a great novel which was difficult to put down.  Kurt Palka was born in Austria, previously made wildlife films in Tanzania and Kenya and worked as a journalist.

I have been slowly working my way through Margaret Laurence’s Manawaka series of novels.  My initial introduction to this amazing author was reading The Stone Angel in highschool.  While I can’t say that I fell in love with her reading as a teenager, I appreciated this novel after rereading it as an adult.  This summer, I enjoyed The Fire-Dwellers.

Busy mom’s can relate to the challenges of raising a family, balancing all the responsibilities and losing oneself in the busy days.  This story describes the life of Stacy, living in the suburbs and experiencing an unhappy existence as her husband spends long days as a door to door salesman leaving her to care for their 4 children.  She cannot relate to her spinster sister who lives with her mother who was the main character in A Jest of God which I read last summer.

Through mistakes and soul-searching can Stacy and Mac rediscover each other?  Read the novel to find out and enjoy the wonderful writing of Margaret Laurence!

Like Loading...
This entry was posted in Canadian, CBC's 100 Books That Make You Proud to be Canadian and tagged Gabrielle Roy, Holding Still for as Long as Possible, Kurt Palka, Margaret Atwood, Margaret Laurence, Stone Mattress, The Fire-Dwellers, The Manawaka Series, The Piano Maker, The Tin Flute, Zoe Whitall. Bookmark the permalink.