Posted on September 24, 2017 by AYearOfBooksBlog

As fall has just begun, it is time to get caught up on my posts from my reading summer!  In order to share all the great books from this summer, I am going to do a few summer blitz posts where I will provide short reviews on a few books at a time.

If you have been reading my blog, you will know that I have enjoyed listening to Terry Fallis books in the car, in fact,  other drivers probably wonder what is wrong with me as I laugh heartily driving all by myself!  He is a great narrator and I think his podcasts are terrific!  After enjoying the irony and tongue and cheek sarcasm of  The Best Laid Plans, The High Road,  No Relation and Poles Apart,

I have to admit that I was a bit disappointed in One Brother Shy.  I had difficulty suspending belief and just going along with the story which, in a nut shell, told the tale of Alex who struggled with the death of his mother only to find that he had a secret sibling.  After discovering a baby picture showing twins, he used face recognition to find his brother who happened to live in England.  They joined forces to find their father taking them to Russia.

Unfortunately, the initial chapters describing the mother’s death threw me off.  Working palliative care, I struggled with this description of her death and the lack of accuracy relating to home care services – any care worker that accepted such gifts would quickly be fired!

Overall, this was not my favourite Terry Fallis book but don’t let me discourage you from reading it as we all have different perspectives.  If you have not read Terry Fallis, I would suggest starting with The Best Laid Plans which is my favourite!

I do look forward to his future novels and his humorous narrations!  Check out his answers to Novel Questions.

“Adventure in wilderness is not new to me, though it forms part of the backdrop of my boyhood:  tables and chairs, bedsteads and stools, armoires and sideboards raising out of the tall grasses; locomotive engines rusting in the woods; boarded up stores chockfull of discarded paraphernalia of the gold rush”.

As part of a Cross-Canada Summer Reading Challenge, Drifting Home was my book from the Yukon.  I found an old (and missing the cover depicted above) copy from the library and enjoyed learning more about the rugged terrain of the Yukon and Berton and his family who headed off on an adventure following the path of Berton’s father in his quest for gold.

It was shocking to read how the wilderness was punctuated with furniture, household debris and hulls of ships that were abandoned after the gold rush.  Berton wanted to show his family the beautiful terrain and set out on 3 rafts with a guide, his wife, 7 kids and his nephew.

His book was set out by day and certainly makes the reader want to follow with a trip to the Yukon, the land where Jack London spent a winter and Robert Services wrote poems.

“Every river has a personality of its’ own, but the Yukon has more than most because its’ character changes as it grows, broadening and maturing on it’s long journey to the sea”. 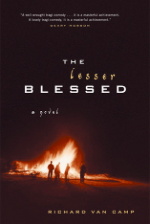 This coming of age novel, set in the Canadian North, is celebrated on the CBC list of 100 Books that Make You Proud to be Canadian.  It tells the story of a teenager from the Dogrib nation who is struggling to fit in after following his memory lost from an accident.  He befriends a troubled teen and is introduced to drugs and alcohol as he comes to terms with his past. Although I enjoyed this novel, I found it a bit slow and would be better suited for a YA audience.