Posted on May 1, 2017 by AYearOfBooksBlog 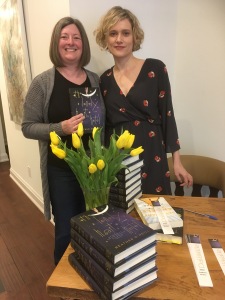 “No child is a tale of abuse, they still have all this magic inside them”

Niagara-on-the-Lake was a beautiful setting to meet Heather O’Neill at the Hotel Dallavalle Author Series.  Heather is the author of Lullabies for Little Criminals which was published in 2006 and won the 2007 Canada Reads.  May and I were thrilled to meet the author who also wrote The Girl Who Was Saturday Night (which I am almost finished reading), Daydreams of Angels Stories (which I recently found at the BSO book sale) and her newest book The Lonely Hearts Hotel.

The evening began with a book signing (which was being filmed for a Cogeco program) and the author graciously signed my pile of books as we waited for the activities of the evening to begin.  The group was treated to cocktails and hors d’oeuvres, followed by an interpretive dance

performance by two local, young dancers who represented the story through the art of dance.

The group retired to a quiet room to hear Heather speak about The Lonely Hearts Hotel which was set during the 1930s in Montreal.  It was a time of criminals running the city, of brothels and of pay offs to city officials.  She shared that the novel had been inspired by her late father who had grown up, youngest of 9 boys, during the depression.  Although he worked as a janitor, he had expressed regret of giving up the chance to live a life of crime like his brothers.   Heather had grown up with nostalgic stories of the lives of

At the age of 22, Heather wrote a 5 page story about gangsters including Rose and Pierrot (who both were “always popping up below the surface”, Pierrot appearing in The Girl Who was Saturday night and Rose appearing in a short story).   Inspired by a boarded up building on Rene Levesque boulevard which had been a home for unwed mothers, Heather began to develop the characters of Rose and Pierrot, children who had grown up in an orphanage in a time when adoptions were uncommon.  Both children had extraordinary talents, Pierrot was a piano prodigy and Rose excelled in the art of pantomime.

Heather shared that she wrote the story like a theatrical play as Rose and Pierrot, 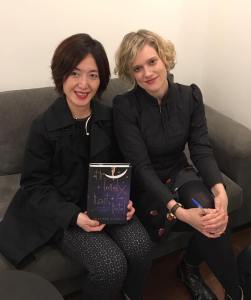 who were separated tried desperately to find each other.  They surfaced in the escape routes of the Red Light district of Montreal reminiscent of clowning techniques when they were close to finding each other but remained apart.  Heather noted that she tried to give the story the staccato feel of a black and white movie reminiscent of her research of 1930s pornography.

The story features the subversion of gender roles with Rose attempting to seduce the master of the house where she was employed as a governess and becoming the violent character.  Like her other writing, this story has a theme of child abuse since the author is “interested, in all my books, how children survive abuse” adding that the abused must “accept that abuse changes you” and “accept the abused self”.  The abuse is a “source of melancholia” for Pierrot who does not share his tales of abuse until he finds Rose which was the most difficult part of the novel for Heather to write.

“I was a book addict as a kid”

It was interesting to learn more about Heather’s own childhood.  She became interested in 1930s porn as a child since her neighbour left pornographic books on the stairs.  She noted that he had been a book hoarder, even propping his mattress on a pile of books – eventually he died in an apartment fire as predicted by her father who would always say “he’s going to burn the f…ng building down”.  She loved books and started to write at age 8 after her uncle gave her a journal.  She laughed that her dad “thought I would use them against him” and had destroyed the journals as she completed them.

I was able to ask about her writing process.  She explained that she tends to have a vague outline, a sketch of the characters and the setting as she begins.  She shared the analogy of a painter completing sketches to decide on the colour and style and she does the same with words, creating rough sketches to see how her ideas look on the page.  She tends to write the ending first.  She admits that it is difficult for her to find the story and that “a lot of it ends up in the garbage” in a time of “trial and error”.

Before retiring to the dining room, the audience was happy to learn that Heather is working on her next book.  In a later conversation with her, May and I learned that a future project is to write her memoir which will give insight into her own childhood experiences.

Colleen at Hotel Dallavalle did a fabulous job ensuring that the audience was well entertained and  engaged by an award winning author from Montreal.  It was certainly worth the drive and the evening was topped off with a wonderful 6 course meal as outlined in the menu and pictured below.

Although it would be difficult to attend the summer author series that takes place on weekdays due to the busy tourist season in NOTL, I will be watching for their fall author events.  Joseph Boyden is being booked in the winter of 2018 after his newest book is released and I am looking forward to this!

Like Loading...
This entry was posted in Author event and tagged Heather O'Neill, Hotel Dallavalle, The Lonely Hearts Hotel. Bookmark the permalink.