Posted on April 24, 2017 by AYearOfBooksBlog 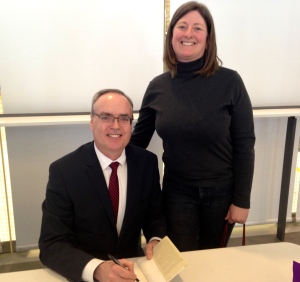 If any of you have seen me driving alone and laughing out loud, I might have been listening to the podcasts of the award winning novelist, Terry Fallis.  Although I have enjoyed reading his books, they are also so fun to listen to via podcast.  The satire and his great narration make the kilometres pass quickly and are a great way to end a busy day at the office!

I have had the privilege to meet Terry Fallis twice at author events.  The first time was at the 2015 One Book One Brant event, discussing No Relation which I especially enjoyed since I am friends with both Kim Mitchell (who incidentally takes most of the author event photos on this blog) and Michael Bolton (who does not have long, curly hair or sing – at least publicly)!  I also met Terry at the wonderful Grimsby Author Series event as he read from Poles Apart.  Both events kept the audience laughing as he shared his own life experiences and discussed his novels!

In agreement with Terry, I think my favourite has been The Best Laid Plans (with its sequel called The High Road) although I sure wish this blog would take off like the blog in Poles Apart!  Unfortunately, I don’t think that CanLit gets quite the attention it deserves!

Thanks to Terry for taking the time to answer my novel questions!!  I look forward to reading/listening to his latest book:  One Brother Shy!

What is your favourite childhood book?  Why?

I’d have to say Pilot Jack Knight. It’s the true story of a pilot in the early part of the last century. I loved the strong sense of adventure. As well, it was probably the first book I’d read on my own that made me cry. I read it over and over and still remember the entire story.

Did you always want to be a writer?

When it became clear that I would never play in the National Hockey League or make it big as a singer/songwriter, becoming a novelist was next on my list.  Actually, I came to writing later in life. I wrote my first novel,. The Best Laid Plans, when I was 45 years old. Clearly it took me a while to reach the starting line. But I’ve always loved language, writing, and books, so attempting to write a novel seemed almost inevitable.

Where is your favourite place to write and why?

Unless I’m traveling, you’ll find me writing in the library we built on the this floor of our home. Being in that room just makes me want to write. Follow this link for a peek.

What work are you most proud of and why?

Now that’s a tough question bordering on cruel and unusual punishment. It’s kind of like asking which of my children I love more. Of course I love all my novels, but I have a very soft spot in my heart for my first, The Best Laid Plans. The response to it changed my life as a writer. Having said that, I’m also very fond of my third novel, Up and Down.

What is the last book that you read and why would you recommend it… or not?

I’ve just finished Bill Deverell’s upcoming novel, Whipped, and I loved it. He mixes crime, politics, satire, and lots of laughs along the way and writes in a way that keeps you turning those pages. The book will be released soon and I highly recommend it.