Posted on April 9, 2017 by AYearOfBooksBlog 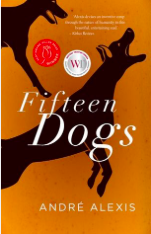 Fifteen Dogs has been a prolific winner, taking home the prize for the 2017 Canada Reads, the 2015 Giller Prize and the 2015 Rogers Trust Award.  After enjoying the final debate of Canada Reads and meeting Andre Alexis, I decided to reread the book which was defended so well by Humble the Poet.  The reread expanded on my understanding and reflection and I took the time to appreciate the creativity of the poetry which was included in the story.

The novel describes the lives of fifteen dogs who escape from a veterinary clinic as part of a bet by the Greek Gods, Hermes and Apollo.  The Gods interfered with the dog’s lives as a wager to see if any dogs would die happy after being given the gift of human consciousness.  Each dog experienced a unique fate as the Gods both monitored and meddled with their lives, waiting to see who would win the years prize of the other’s servitude.

The fifteen dogs recognized the change in their thinking as they escaped the clinic, the majority fleeing to High Park.  Each dog had varying life spans and the book described their struggles with language, leadership and survival.  It is a thought provoking book and included a great deal of violence and death.

The Toronto setting was familiar and the book included a map of High Park and the The Beach areas of Toronto where the dogs explored.  This map was accompanied by a list, a Dramatis Canes, which provided the name and description of each of the fifteen dogs.  Both were handy to refer back to while reading the novel and keeping track of the breeds of each dog.

I appreciated reading Fifteen Dogs for a second time after all the thoughtful discussions at Canada Reads.  It certainly makes a reader consider the lives of both dogs and humans.  It is so creative and helps readers reflect on their own relationships with dogs.

This is a book that everyone should read once so that they can pause and reflect on human nature and relationships.

It was fantastic to have a chance to meet Andre Alexis and have my book signed after the end of the debate.  Many in the studio audience had left, but we had an opportunity to share our thoughts with him.  I commented on how the story was enhanced by the physical appreciation of the quality printing and paper and he laughed and said to tell that to his publisher!