23. The Translation of Love (Lynne Kutsukake)

Posted on March 20, 2017 by AYearOfBooksBlog 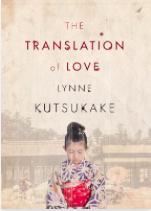 In preparation for the final Grimsby Author Series event of the 2016-17 season, I immersed myself in The Translation of Love during a long trip home from vacation in Myrtle Beach.  It is a beautiful novel set in Japan during the American post-WW2 occupation.  Despite the devastation and despair of the war, the characters care for each other and make a difference in each other’s lives through kindness.

Young Fumi thinks her sister, Sumiko, is missing.  Despite concerns from her parents, she had left home to work in a dance hall, sending home wages to support her family.  Her parents were concerned about this dishonourable job so instructed her to visit  when Fumi was at school to shield her.  With the help of Aya, a Japanese-Canadian girl, who has been repatriated to Japan from a Canadian internment camp, the girls write a letter to General MacArthur requesting assistance to find Sumiko.

The letter is intercepted by Matt, a translator who is a Japanese-American soldier.  He sees the girls in the melee of people waiting for a glimpse of the general and instead of translating the letter, he keeps the letter intending to try and help the young girl find her sister.  He is kind and means well but does little until the girls appear again.  He enlists the assistance of Nancy, a Japanese-American typist trying to get back to the US and they are unsuccessful in finding her sister.

As the young girls search for Sumiko, the readers are treated to more detail about Aya’s past and the tragic loss of her mother in the Canadian interment camp.  Life is not easy for her in Japan.  She does not speak Japanese as well as the other children and her father is busy working to support them.

Sumika, who is not really lost, has her own challenges and the stories all come together with good intentions, caring and love.  The story is intricately woven together with each character sharing their own stories within the novel.  It is heartbreaking at times, hopeful and shows how resilience and strength grow through adversity.

It is hard to believe that this is Lynne Kutsukake’s first novel.  It is expertly written weaving history and stories in a way that leaves the reader wanting to know more about the characters after the story ends.  It is a another part of history that I needed to learn about and I hope that there is a sequel pending!  I am looking forward to hearing more about the story and the author.  I am certain that this novel is full of hard work, research and dedication by Kutsukake who worked at the University of Toronto as a librarian and specialized in Japanese materials.

Tonight should be a evening celebrating a love of reading at the season’s finale of the Grimsby Author Series!

Like Loading...
This entry was posted in Author event, Canadian, Grimsby Author Series, Historical Fiction and tagged Lynne Kutsukake, The Translation of Love. Bookmark the permalink.

5 Responses to 23. The Translation of Love (Lynne Kutsukake)