Posted on December 3, 2016 by AYearOfBooksBlog 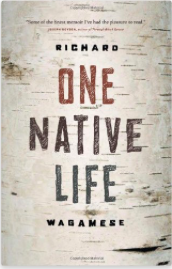 “I have always wanted to write.  There isn’t a time I can recall when I didn’t carry the desire to frame things, order things upon a page, sort them out, make sense of them.  But learning to write was a challenge, an ordeal”.

As part of a Secret Santa book exchange, I was thrilled to receive a copy of One Native Life by Richard Wagamese.  It is a series of vignettes which form a memoir of his life, giving insight into his challenging childhood and life experiences which inspire such beautiful storytelling.  The Medicine Walk was my first introduction to Wagamese and is my absolute favourite book of 2016!  After finishing this book, I devoured Indian Horse and Ragged Company which also shared difficult stories that give readers a different perspective to consider.  All Canadians should read these books to consider the generational impacts of the dreadful residential schools.

One Native Life is a transparent account of Wagamese’s early life.  His birth family had been scarred by residential schools leading to alcoholism, abuse, abandonment and neglect (not to mention a badly shattered shoulder leaving his arm deformed prior to a surgical repair years later).  He was placed into foster care and then into an adopted family where he was also abused and left without a connection to his indigenous heritage.

Wagamese spoke of how eager he had been to learn yet he was held back, labelled as a “slow, difficult learner” without “much hope for the future”.   He was learning mostly by memorizing and it was not until Grade 3 when a caring teacher asked him to write on the board that it she realized that he was not a slow learner but vision problems and needed glasses.  That teacher helped him relearn his letters and he graduated with straight A’s that year!

Life at home and at school was not easy.  He sought refuge in the library, reading, listening to music, learning about art and discovering a new world.

“Libraries have always been my refuge.  As a kid I met Peter Pan there, Curious George, the Bobbsey twins and the great Red Rider.  It was stunning to discover that they’d let me take those characters home.  I loved the smell of libraries, too a combination of dust and leather and the dry rub of paper mixed with paint and wood and people.

The library showed me the mysteries of the world.  There was always something that I’d never heard of or imagined, and books and stories where I could learn about it.  I read wide-eyed, tracing the tricky words with a finger I could sound them out and discern a fragment of meaning.  The library was like an enchanted forest.  I explored every inch of the stacks, fascinated by the witches and goblins, fairies and trolls, great wars and inventions I encountered there.”

It was not only the library that sustained him but his writing:

“My life became the walk to school and back.  Then it was four hours in my room each night to study.  Except that I didn’t study.  I wrote.  I wrote stories and plays and poems. about the kind of life I imagined every other kid was having, a life that wasn’t restricted to the cloister of a small room.  My stories were filled with hopes, dreams, happy endings and skies.  And I never showed them to anybody”.

At the age of 15 years, Wagamese ran away.  He hitchhiked all the way to Florida before being returned home by police.  He ran away again, spent time living on the streets and even worked at a carnival (and yes, helping to put the Ferris Wheel together as described in Ragged Company).  These experiences are repeated in his books and I loved gaining insight into the stories he told including the time when he was given a traditional name:

“He called me Mushkotay Beezheekee Anakwat.  It means ‘Buffalo Cloud’.  It’s a storyteller’s name. he said and he told me that my role in this reality was to be just that:  a teller of stories, a communicator, a keeper of the great oral tradition of my people.”

Despite abuse, abandonment and a very difficult childhood devoid of his culture and heritage, his memoir describes his feelings of peace and being a part of the landscape where he lives as an Ojibwe man.  He appreciates the trees and the wildlife as he describes the mountain and lake view outside his window.  He has reconnected with his birth family,  learned his Ojibway language and appreciates the teachings and rituals like smudging.

I have learned from each book that I have read and look forward to reading more.  Richard Wagamaese has a way of quietly telling stories with lessons of understanding, acceptance and reconsidering judgment.  His books are amazing and his name should be synonymous with high school curriculums.  I am thankful for his writing, for his bravery and for sharing bits of his own story with readers.  I am not sure if he participates in author events but if he comes to Southern Ontario, I will strive to be first in line to meet him!

As I visit the library, I will think of the difference that words, stories and books made for this boy as he struggled at home and school.  As I search for books to restock my Little Free Library, I will be on the look out for more books by Richard Wagamese as I want all my friends, my neighbours, my community to learn through his stories.  I loved reading the memoir but if I can suggest one book to read this year, it will be The Medicine Walk!

“I learned how to live through adversity in the library.  I learned how words and music can empower you, show you the world in a sharper, clearer, more forgiving way.  I became a writer because of what I found in libraries and If oudh the song that still reverberates in my chest.  I’m a better man, a better human being and a better Indian because of the freedom in words and music.”

Like Loading...
This entry was posted in Canadian, Memoir and tagged One Native Life, Richard Wagamese. Bookmark the permalink.