Posted on November 20, 2016 by AYearOfBooksBlog

Craig Davidson, author of Precious Cargo, spoke along with Ami McKay at the November 14th Grimsby Author Series event.  He shared heartwarming anecdotes from his year driving the “short bus” to an audience of 250 individuals.  Although Precious Cargo is still in my growing TBR pile, I am looking forward to reading about his experience and learning about his experience.

Davidson has local connections.  He grew up in St. Catharines.  His book, Cataract City, which was short-listed for the 2013 Giller Prize was set in nearby Niagara Falls.  At the event, he shared that he had just reconnected with his grade 13 Creative Writing teacher who had said about his writing “I am as shocked as you are Craig, your work is not bad!”

He spoke of his time in Calgary:  he was “down on his luck”, was a failed writer, had been fired from the local library over a “plant watering incident”, had not been selected to work as a work harvester and needed a job just to pay the rent.  Although he was uncomfortable with individuals with disabilities, he took a job driving a bus which he describes as a “transformative voyage” which changed his life.   He shared that he had never met a group of people and felt such an “instantaneous click”  He took the job because he needed the money yet met 5 kids and their parents who impacted and changed his life.

“Sometimes you can’t do anything but be grateful.  Experiences like that sometimes anoint you when you need it the most”.

Craig talked about how he was the “goofy bus driver” yet he gave the kids a safe space to talk.  He benefited from the “wonderful perspective of the world that children have” and found his time on the bus therapeutic.  He only drove the bus for that one year, the next year would have been a whole new bus with different riders.  Things could never be the same.

He was asked about his writing process.  He answered that he had shared with the kids and their families that he might write about them.  As part of the process he wrote letters to the families and interviewed the parents.  Being sensitive and not wanting to hurt anyone’s feelings, he sent copies of the drafts for the families to review.  He changed the names of all the children (except for Gavin) as it “felt like the right thing to do”.  Gavin’s parents chose to keep his name in the book.  He has kept in touch with his riders and families since driving the bus and the kids are now in their twenties.

“The names aren’t important, their stories are important”.

During the book signing, we spoke about his experience being short-listed for the Giller Prize.  It had been an overwhelming and amazing experience for him.  I am pleased to have autographed copies of both Precious Cargo and Cataract City which I need to get reading!

For readers who are interested in the horror genre, Davidson writes stories under the pseudonyms of Nick Cutter and Patrick Lestewka. 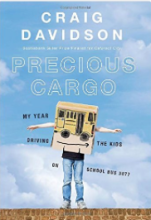 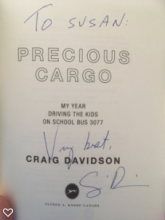 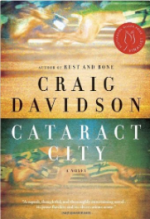 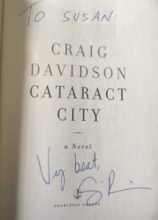