Posted on November 15, 2016 by AYearOfBooksBlog 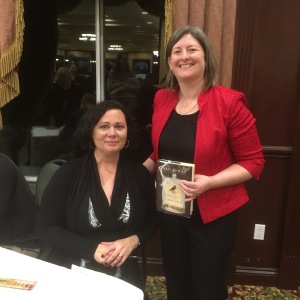 It was fabulous to meet Ami McKay, author of The Birth House, The Virgin Cure and The Witches of New York as part of her cross-country tour.  Born in Lebanon, Indiana, this author has another claim to fame – she was in the movie Hoosiers – although she laughed that just about everyone in the town was part of the movie!  She moved to Scott’s Bay, Nova Scotia (for a man) and started writing freelance for the CBC.  Her books are well-researched and all have strong, assertive, female main characters. I was thrilled to hear that Ami McKay was part of the 2016-17 season of the amazing Grimsby Author Series.

The Witches of New York began as a sequel to The Virgin Cure to continue to the story of the character Moth.  Ami writes about situations reflective of her own family history including her own great, great grandmother who had been a physician in NY who practiced what we would now call street medicine (inspiring The Virgin cure).  Ami was also influenced by the suffragette movement and the influence of Susan B. Anthony at a time where women were struggling to take ownership over their bodies, their reproductive health and have a say in their own lives and communities.

She was also inspired by Victoria Woodhull, a young woman who landed in Manhattan in her mid-teens to make a living telling fortunes.  She went on to become the first female stockbroker on Wall Street at the age of 19 years old, started her own newspaper and provided monetary and psychic advice to many of NY’s upper crust.  She was accepted until she decided to run for the presidency.  At this point, she started to be called “Mrs. Satan” and a witch.  Ami joked that she “likes to think that she was the first nasty woman” eliciting chuckles from the audience.

uses an outline.  She shared that she always tries to build an outline yet she inevitably ends up throwing it out.  She writes character sketches, tends to front load her research and enjoyed a trip to NY as part of her preparation for her current novel.

She was asked about whether she had experienced magic during the writing of her book and shared that after completing her draft, she took a break and was doing some genealogical research into her own family.  She stumbled upon her 9 times great aunt Mary Ayer Parker and discovered that she was a 55 year old widow who was accused, tried and hung for witchcraft.  At this point she “knew I needed to explore this topic” (witchcraft) and add more magic into the book.  As she researched she found 4 more family members in her ancestry that had been accused and imprisoned.

Her research led her to the history of witches.  Historically, these women were known as healers or diviners and could see things that others could not.  As these women gained power over their own existence, sought eduction or spoke out, men and the church began to use the term witch in a disparaging way, calling women hysterical and sending women to asylums.  She spoke of the Comstock Laws which made the discussion or use of contraceptives an offence.  Because of such laws women would quietly share ways of managing their reproduction through herbal remedies in places like teashops.

After completing the Advanced Reader Copies, her publisher asked her to present to a 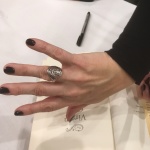 group of readers.  During her flight, she met a woman  who had a ring with a pentagram. She wished her a happy summer solstice and received a wiccan greeting.  Ami commented on her ring and ended up telling her about the book.  The woman kindly gave her the ring and they talked about her shop called Brimstone and Belladonna which she ran in Pembroke, Ontario.  The shop sold crystals, casting books and herbs which were stored in glass jars similar to the one on the front of the book.  What an amazing coincidence? or magic?

copies of her 3 books which I had brought.  We chatted about her ring and the “wicked” nail polish she sported.  She commented that although she is still in the midst of travelling she should have time to enjoy the Niagara region wine and will carefully pack the Grimsby pottery that she received as a gift – those of you that were in line will know how she will safeguard the pottery in her luggage!

As I meet more and more authors, Ami will be added to my short-list of authors that I would LOVE to have lunch with!   She was dynamic, engaging and exemplified a strong, resourceful woman like the those that she portrays in her novels.  It is too bad that she lives so far away as it would be amazing to have her join our wonderful group of independent women that meet monthly for our book club!