Posted on October 23, 2016 by AYearOfBooksBlog

“Discover what you are good at and live meaningful lives” 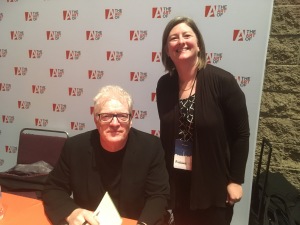 The initial speaker at the Art of Leadership conference was Sir Ken Robinson, an expert in creativity and innovation whose TED talk Do Schools Kill Creativity has been viewed by over 41 million people!  He received his knighthood in 2003 for his services to the arts.  His book, Finding Your Element, (which I now have a signed copy) is a New York Times Bestseller.  His talk was engaging and peppered with funny anecdotes which kept the audience of 1600 people laughing and attentive.

His initial concept was that “all people are born with tremendous talents” which need to be discovered and that human resources, like natural resources, are “highly diverse and you need to dig down”.  He talked about the difference between aptitude and ability and that humans are very curious and “absorb most of what we know from the people we are with”.  Unfortunately, organizations often ignore the potential talent that is available and miss opportunities for greatness.

“Diversity is the vitamin of innovation”.

He quoted a statistic from a Gallup Poll that over 70% of individuals are uninterested or disengaged from their jobs and that the World Health Organization predicts that the 2nd most prevalent cause of illness by 2020 will be depression.  He feels that the key to solving this problem is “finding something you are good at and something you love” since it is all about energy, both spiritual and physical, to keep going.  Heads were nodding in the audience with this piece of advice.

“If you love what you are doing, it feeds your energy”

He told the story of how his wife of over 40 years loves Elvis.  Apparently Elvis had not been allowed to join the Glee club as it was thought that he would ruin the sound – what a great example of talent overlooked!  He also shared that his friend Paul (that is Paul McCartney) had a similar experience when he hated music when he was in school.  George Harrison was also at that school and the teacher, who had half the Beatles in his class, had missed that talent which Ken thought was “a bit of an oversight”.

Sir Ken also shared the story of Kodak – a company that started with the immensely popular Brownie camera which employed and sustained the community of Rochester, New York.  Unfortunately, the company is now practically bankrupt.  Photography has gone digital and even though they invented digital photography in the 1970s, the company of chemists ignored it, instead choosing to focus on the chemical process of film development.  His example showed that this company “couldn’t see what was right in front of them” when they needed to adapt to both internal and external changes.  They missed a key opportunity as more pictures, and he laughed – selfies,  are being taken than ever.

It is essential for leaders to “develop the creative ability of every community member”. Companies need to have “synergistic relationship with their environments”, feeding off other peoples ideas and encouraging innovation as a “constant refractory process”.  To reinforce that the solutions are often right in front of us, he shared this Dutch video which showed individuals trying to get a peanut out of a tube.  Can you figure it out before the answer is clear in the video?

“We absorb most of what we know from the people we are with”.

“People have tremendous talents but we exclude them because of where they sit or their job descriptions”.

He finished by sharing another video called Yes I Can, which portrayed special olympic athletes showing that “as humans we are capable of extraordinary things” yet “everyone is struggling with something” and that we all have special needs.  His final message was to reframe what we are capable of!

Key points depicted by Carolyn Ellis during the event.