Posted on October 8, 2016 by AYearOfBooksBlog 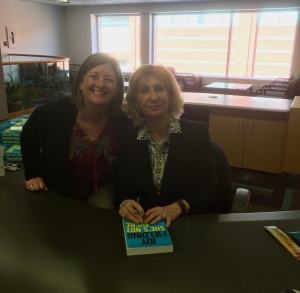 In the spirit of Thanksgiving weekend, I am thankful to have spent an afternoon with bestselling, Canadian author Joy Fielding, at the Brantford Public Library.  The event which sold out in one week began with a delicious lunch catered by Kaizen Catering and was followed by an engaging talk, time for questions and a book signing.

Fielding, who shares her time between Toronto and Palm Beach, is the author of 26 published novels (27 written) including She’s Not There which was included in the ticket price.  It has been a long time since I had read See Jane Run which was published in 1991.  I am looking forward to reading this latest book since her books have been described as “page turners” with “strong women at the core” .

The author feels that fiction has a way of getting to the truth and that basic human emotions of love, hate, anger and fear “create a universal story” that everyone can relate to.  She loves to hear that readers had trouble putting the book down or that the book kept them up all night and feels she engages readers by creating believable characters and she “makes it my life’s mission to try and create real, believable women”.  In doing so, it is her goal that readers can see themselves in the story.  She wants to hear readers to say “oh my god, that is my mother;  oh my god that is my sister or even oh my god, that is me”.

Fielding said she is open to any questions but hates being asked where she gets her ideas.  She did share that she reads a lot and gets her ideas from the news, TV, her daughter’s lives and that she “relies on friends to have interesting crises on a fairly regular basis”.  For her, getting ideas is not the difficult part but that the “hard part is figuring out what to do with the ideas”.  She described that she nurtured the idea for See Jane Run for 8 years before she figured out the plot.  She had written a good opening line, a year later the first chapter and finally sitting bolt right up in bed one night finally said “I’ve got it” .  She got up to write a 12 page outline in the middle of the night, admitting that “once I solved the mystery of what happened to Jane, the book wrote itself”.

Fielding shared that She’s Not There was “ripped from the headlines”, inspired by the

Madeline McCann disappearance of May 2007 when the little girl went missing from her holiday apartment while her parents dined nearby with friends. In She’s Not There, the daughter is kidnapped from California when a couple were enjoying their 10th anniversary dinner, checking on the kids every half hour.  The book begins fifteen years later with a phone call from their missing daughter. Fielding described fiction as “giving order to the chaos” and that she had been inspired by the McCann disappearance but “I got to give it the ending I want”.

The crowd enjoyed hearing about her writing process which she described as being “like any other job, you have to sit down every day and do it”.  She feels it is a creative and wonderful job and along with talent feels that writers need 3 things:

She takes her own advice seriously and writes 3-6 hours each day, ideally in the morning.  The flexibility of writing has enabled her to stay home with her girls and travel with her husband of 42 years.

During the question and answer part of the event she was asked whether she knows how the novel will end when she writes her outline.  Fielding believes in knowing the ending which is essential “to build the suspense, up the ante and increase the tension”.  She feels that having an outline was the best piece of advice that she received as it helps to focus her thoughts.  During her time teaching at U of T, she required students to give an outline of their story in 25 words or less since if you can’t talk about your story in 1-2 sentences, you don’t know what your book is about.  An outline makes the writing process as easy as possible and she ensures that she understands her character’s life before the story.

I am always interested in what authors are reading and was able to ask the author what she is currently reading.  Fielding notes that she finds it difficult to read fiction while she is writing and tends to read non-fiction since it does not require the same concentration or commitment.  She had recently finished Razor Girl by Carl Hiasson, which is part of a

Florida detective series and Before the Fall by Noah Hawley.  She laughed that she buys books all the time and they pile up – I can certainly identify with that!

Joy Fielding was an engaging speaker and it was a terrific way to spend an afternoon being inspired, learning about her writing process and laughing with a group of women that share a love of reading. There was one token man in the audience and I did chuckle as I caught him rolling his eyes when men were described as “pretty straightforward” while women are “more complicated and interesting” to the author.

The Brantford Public Library announced that this would be the first of (hopefully) many author events and I look forward to meeting more authors at my hometown library.  The event was thoughtfully planned and well-organized.  If BPL can bring such high calibre authors the events are sure to be a great success!

3 Responses to Lunch with Joy Fielding