Posted on September 27, 2016 by AYearOfBooksBlog 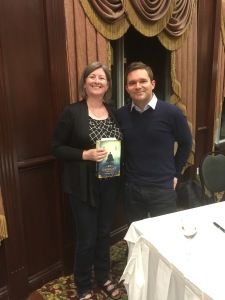 Last night was the opening night of the 15th season of the fabulous Grimsby Author Series.  The room was filled to capacity with an audience eager to hear the readings of Steven Price and Emma Donoghue, the first 2 authors of the 2016-17 season.  As always, talented musicians entertained the crowd as participants sampled local wine and found their seats.  Ken Boichuk returned as the engaging moderator with his well-researched introductions and thoughtful, probing questions which inspire the audience to read the books presented.

Steven Price was enthusiastic despite his long day of travel.  A family man, he had made the trip from Victoria, BC, landed in Toronto and drove himself to Grimsby following a late night toy assembly for his young daughter.  He shared a reading from his second novel, By Gaslight which had been nominated for the Giller Prize long-list.  Price has been described as a  “skillful storyteller” who shares a “panoramic view of the Victorian Age” which takes “the reader on a cinematic tour”.

The vivid and descriptive readings were from the beginnings of the first and second chapter.  These selections 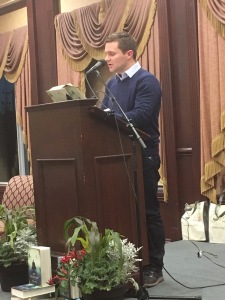 introduced the two main characters, Pinkerton and Fool.   Pinkerton,  the detective who was seeking the only criminal that his father had never apprehended, subscribed to the fact that the end justified the means.  Fool was characterized as the dubious, slippery individual striving to make his fortune by a less honest route.

Described as a “skillful storyteller”, Price had the privilege of working with the late editor Elin Seligman who had previously worked with Canadian authors such as Alice Munro and Michael Ondaatje.  She sadly passed away in March and By Gaslight was one of her last projects.  Price was sorry to have missed meeting her in person and shared that her style of editing was to work with the author real-time, sentence by sentence.  The pair spent 5-6 hours, Monday to Friday, editing over the phone for a six-month period with Seligman in Toronto and Price at home in Victoria. Price shared how Seligman was respectful of his family time, knowing that he had a young daughter and a newborn to spend time with.  He had hoped to meet the famed editor when he visited Toronto but unfortunately she was in the midst of treatments so he missed his opportunity.

When asked to describe his inspiration for writing about the Victorian Era, he responded that “books are a little organic” and shared that he had written the first paragraph while he was working on another project.  The character of Pinkerton had both frightened and interested him and was loosely related to tales told by a reclusive uncle about his grandfather.  He had learned that his grandfather had experienced serious problems with the law which led to his hasty departure from England to Canada before he settled on the West Coast.  He had escaped a life of crime to open a security (locks and safe) shop which remains in his family, managed by his brother, generations later.  Price reported that this inspired his interest in the ability for individuals to straddle both sides of the law.

The length of the book was acknowledged and he joked that “even I haven’t read it all”.  He described diagrams and maps that he had taped together on the wall to ensure that kept the story straight within the 731 pages.  It was important for him to ensure that there were no contradictions and he shared that he was very focused on maintaining a forward momentum to the story despite the reflections into the past.

Price will be a Canadian author to watch and I am looking forward to delving into this dense piece of historical fiction as part of my November “Big Books” challenge through the Goodreads CanadianContent group!

Kudos to the Grimsby Library and the Grimsby Author series committee for arranging a wonderful evening.  I am very thankful for the copy of By Gaslight which I won and proudly add it to my collection of signed Canadian literature!