73. Under An Afghan Sky (Mellissa Fung)

Posted on August 23, 2016 by AYearOfBooksBlog 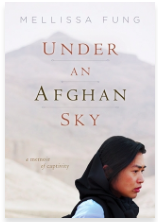 As part of the Acrostic August Challenge, I read Under the Afghan Sky which is a memoir detailing the 28 days that CBC reporter, Mellissa Fung spent in captivity in Afghanistan.  This detailed account of being snatched at gunpoint following an interview at a refugee camp and described her captivity in a rudimentary hole underground.  Fung attempted to journalize her experience and her account of getting to know her captors as she prayed for release.

It is hard to imagine being held underground, subsisting on creme sandwich cookies and juice boxes for almost an entire month.  With a bucket for a toilet, no ability to wash and light from a waning lamp she had nothing to do but write in her notebook and converse with her captors as she prayed for release.

Her family had not been pleased that she was travelling back to Afghanistan and this resilient woman worried about how her parents, her partner Paul and her friends would cope with her disappearance.  She wrote letters in her notebook and even detailed which of her belongings she would leave for her loved ones in the event of her death.  Initially her captors stayed with her in the hole promising her release and keeping her company since she was a woman.  When the captor shared that his mother had died, she was chained and kept in the hole alone saying the rosary and praying for release.

As Fung has written her memoir, the reader knows that eventually Fung will be release but it is difficult to imagine her experience.  It must have been challenging to revisit the fear and remember the damp, dank environment she was forced into.  Bravely, Fung not only wrote about her experience but she returned to the refuge camp to finish her story in a Toronto Star article, 7 years later.

This was not an easy story to read.  It was uncomfortable and I am awed by Fung’s resilience, strength and compelling need to return to Afghanistan.  She shared the complete inability of her captors to consider a different point of view, other than the destructive culture of the Taliban, which gives some perspective into the dangers in Afghanistan.  This is another book that makes me proud to be Canadian and happy to raise my children in a free country.  Fung’s memoir is part of the 100 True Stories that Make You Proud to be Canadian list.

Like Loading...
This entry was posted in Uncategorized and tagged Mellissa Fung, Under an Afghan Sky. Bookmark the permalink.

2 Responses to 73. Under An Afghan Sky (Mellissa Fung)