Posted on July 9, 2016 by AYearOfBooksBlog 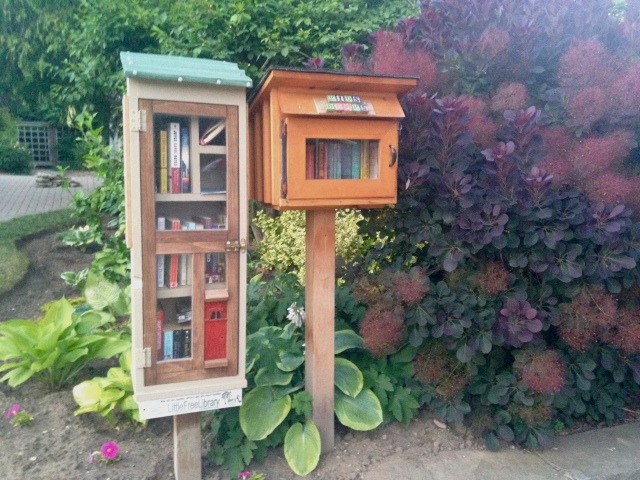 It has been a year since we launched the original Franklin Street LFL to share a love of reading with our neighbourhood.  On this anniversary,  it is time to share more details about the history of the LFL movement and take time to recap the exciting experiences since launching the first LFL in Henderson Survey.

The LFL initiative was started in 2009 by Todd Bol in Hudson, Wi.  He built a one room schoolhouse LFL as a tribute to his mother, a former school teacher, who loved reading.  His neighbors and friends loved it so he built several more to give away.  When Rick Brooks saw Bol’s do-it-yourself project he used his skills as a youth and community development educator with a background in social marketing to help grow the LFL movement.  The original goal was to encourage the building of 2509 LFLs which has been well surpassed with the current estimate of over 40,000 registered LFLs across 70 countries. The initiative hopes to surpass 100,000 in 2017.  Each library is tracked on a world wide map

Bol was inspired and set his goal of 2509 LFLs based on the number of libraries that were supported by Andrew Carnegie in the early 1900s.  Of the 2509,  125 of these libraries were built in Canada including the original Brantford Public in Brantford which opened in 1904 with a donation of $30,000 from Carnegie.  This industrialist emigrated from Scotland working as a telegraph messenger boy and learning management and investments working for the railroads before building a steel empire.  During this time, he was a constant borrower of a private library and he wrote an article including his dictum to:

He was true to his word and donated $350 million to charities, foundations, and universities during last 18 years of his life.

A second inspiration for LFLs was Lutie Stearns.  She shared her love of reading by travelling with a library to lumber camps, farming communities and industrial centres.  She was an advocate for reading and women’s rights despite a devastating stutter and has been known as the “patron saint of libraries”.

Picture from the Brantford Expositor

When we first launched we were pleased to be featured in an article by the Brantford Expositor and a photo opportunity in the Brant News which helped promote our LFL.  This publicity inspired questions by community members and led to several presentations on our experience of stewarding a LFL.  From one of the presentations, it was very exciting when the grade 8 class at Braemar School built 2 LFLs – one to mount in front of the school to share books with the Grand Woodlands neighbourhood and one to donate to the Montessori School in Paris!

Palmater show when I got to speak of my love of reading, my blog and the LFL.  From that show, I have had questions about building LFLs from as far as Regina!  It was so much fun to make the trip into Toronto and have a conversation with Palmater who shares my love of reading!

My family has enjoyed sharing books that we love with our neighbourhood and checking the library each day to see what has been exchanged.  We have appreciated generous donations and wonderful notes in our comment book.  We hope that our experience will inspire others to join the LFL movement and share a love of reading.

Special thanks to my dad who not only built our wonderful LFL last July but when it proved to be so popular, built our second LFL.  It is fantastic to have one dedicated to children’s books and the larger one filled with books for adults (including a shelf dedicated to Canadian authors).  Thanks also to my mom who along with my Grandma Davison helped to grow my love of reading by reading to me and by making many trips to the library!  Thanks also  for the support of family, friends and those who are enjoying the library and donating books.  It has been a fun first year and we look forward to continuing to share our love of reading and hope to see more LFLs popping up in the neighbourhood, in Brantford and across Canada!