Joseph Boyden hosted an wonderful event to celebrate the writing of esteemed author’s Thomas King and Lee Maracle.  The event took place at the Toronto Reference Library’s Appel Salon and was certainly worth the trip to Toronto!  The event was sold out and the audience was treated to a Grand Entrance for the authors by the Snake Island Drummers.  In traditional dress,  an honour song and travelling song were also performed during the event which added excitement and energy to a fantastic event.

A number of tributes were given to the authors before they spoke and they were described as “titans of storytelling”.  Joseph Boyden had the audience laughing as he shared that he had arrived in Toronto with only jeans and t-shirts having to go shopping for an outfit the day.  He laughed and compared himself to Mr. Rogers in the outfit he had purchased.

authors as “national treasures” as she stumbled though her speech in both English and French.  She spoke of connections being made through literature and the importance for all Canadians to understand the pain from colonization.  She promoted that June is Indigenous reading month and how storytelling will “transform society, bring us together and eradicate ignorance”.

The Minister of Reconciliation, David Zimmer spoke next and reiterated that literature focuses attention on important issues and that often the stories have not been included in textbooks.  He shared that these “stories keep a shared history alive” and provide better understanding of a 400 year shared history with indigenous people.  The Deputy Minister, Deborah Richardson, spoke of Premier Wynne’s recent apology for residential schools and the importance of “ensuring that indigenous worlds are seen, respected and preserved through history”.

Thomas Boyden, acting as host,  spoke of “reading and reading” the works of Thomas King and commented that “despite his height he can disappear in a book”.  He described Thomas King as “a person who has to take the snowshoes and cut through to make a path for others”  while King sat quietly on stage.  Thomas King, of Cherokee heritage,  was an imposing figure on stage.  He was taller than all the presenters yet quiet in his affect.  He was described as one who does not appreciate the limelight, who likes to stay in the background and “doesn’t like talking about himself as he has heard all the stories before”.  The author of 6 novels, 2 short-story collections and 2 non-fiction books was distinguished as an author who uses humour to talk about tragedy to make readers think, feel and grow. He has garnered many accolades including the Order of Canada, Governor Generals award, Canada Reads and RBC Taylor Prize and has been a Massey Hill speaker.  Joseph Boyden described him as a trickster and recalled meeting his mentor at an event early in his writing career.

King spoke briefly and reported that he is a very private person and had tried not to be on the stage, that he would have been happy to sit with the drummers.  He talked about his younger days when he returned from Australia, New Zealand and the South Pacific “when the ethnic movement and begun”.  He spoke of a Pulitzer Prize winning author of House Made of Dawn which paved the way to indigenous writing.  He knew one indigenous author, then 3 and that this was just the beginning of indigenous voices.  He laughed that he used to buy every book, then needed a bigger bookshelf, an office and now can’t keep up as there are now so many more indigenous voices.  He described his writing is “part of a continuum”. 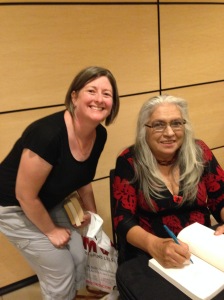 challenges perceptions, is a mentor and teacher.  He shared that she is mother of 4, grand mother of 7 and described her as a “mama bear” and one of his “aunties”.  He talked about how “her laughter resonates across this nation”, commenting that it could be funny yet “kind of cutting sometimes”.  The audience was treated to this humour and her contagious laughter throughout the evening.  Boyden shared that Lee Maracle is the person to go to when you need advice and although she does not like to consider herself and elder, she is certainly considered an elder by young indigenous writers.

Maracle was described as authentic and she seemed to enjoy her time on stage, laughing and commenting during the presentations.  She was an enthusiastic presence on stages and was quoted as saying “life has been a long slow journey over jagged rocks but, god dammit, if I did not dance over every one”!

Miracle spoke of the evening being the first time that indigenous authors have been honoured while she poked fun at the Minister of Reconciliation, told a humorous story about an Indian agent and challenged stereotypes.  She recalled her first story that she had spoken first and then written down.  She had approached a publisher who had turned her down saying that books needed to sell 3500 copies to be a best seller and that “Indian’s don’t read”.  Maracle discovered that many indigenous people including some members of her family, in fact did not read because they actually could not read and started an initiative (after speaking with Pierre Elliott Trudeau for funding) to teach 3500 people to read.  After they learned to read, they each signed a petition that they would read her book and her book was published!  She described how it was “lonesome for writers who had no colleagues” and began to create space for writers.

Her spark was evident as she spoke of her brothers and sisters attending residential schools.  She shared that she was the only one in her family to go to public school but spoke of being “beat up every day” which she said was “ok because I got to go” and that “nothing was going to dampen her spirit”.  She was influenced by her own mother who said “don’t take no for an answer” and you can clearly see she follows her values standing up for indigenous rights and the importance to “hold each other up”.  She acknowledged that she has had a wonderful journey that had led to tonight when she got to dance with Thomas King during their Grand entrance and hug Joseph Boyden.  She ended with a compliment to Thomas King that he’s “a good man” and the importance of the men helping the women referencing his writing that had helped others to share their art. 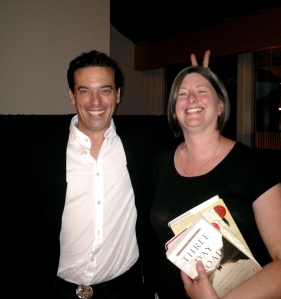 It was an inspiring evening that ended with book signings.  Each author took their time, signing books and speaking with readers.  I was very pleased that Joseph Boyden also was signing books after carrying a back pack of novels around Toronto for the day!  We had a chance to speak to him and when I commented that he must get tired of signing books,  he  joked that that “happened 5 years ago” but that this was what it was all about!  He shared that he is working on his next novel and I will certainly be looking forward to that.  He was open to pictures and you will see that he has a little bit of trickster in him based on the rabbit ears in the picture!

In the end, it was a wonderful day in Toronto and I have met 3 more authors that I would LOVE to have lunch with!!!