Posted on February 9, 2016 by AYearOfBooksBlog

Kevin Newman was the face that I remember from Global National – a trusted newscaster who shared news important to all Canadians.  All Out co-authored by Kevin and his son Alex is thought-provoking and insightful. It was a great experience to hear Kevin speak and get my book signed.  It was unfortunate that his son, Alex could not attend and share his perspectives with the crowd, but I suppose Australia is a bit of a long commute (for that matter travelling across the country was a lengthy trek for Kevin so I should likely stop complaining about my commute)!

Kevin shared that he had been doing research into a show when he learned that gay and lesbian youth were twice as likely to commit suicide.  He googled to find out how many fathers had written books about their gay children, found not a single book and stated that “clearly this is a conversation that needs to happen.”  Originally the book was going to be written by all 4 members of the Newman family but the editor suggested that the recollections of both men would be more effective in sharing their story for others.

gay man.  It  evaluated the experience of both men reflecting on the years when the children were young and Kevin was dedicated to supporting his family through a ambitious career in journalism.  The book focused on the relationship between father and son while Kevin was consumed with work and Alex was struggling with bullying and his own sexuality.  Kevin wanted to be an involved partner but admitted that “in many substantial ways, I was no different that my father”.  He grew estranged from Alex without even realizing it.  Alex ended up unsure if he was talking to Anchor Kevin or Dad Kevin.

In an effort to provide for and protect his family from “ugliness”, he hid his professional failures from his family.   Millions of viewers realized he had lost his job at Good Morning America while his kids had no idea and believed he was promoted to return to Canada and build Global National.  He stated that he hid his own hurt and vulnerability from his family in an effort to protect them but ended up creating a distance.  Alex did not see that his dad struggled too.

“In my child’s moment of crisis, he did not trust my love would be unconditional – that is my failure”

So much of the book is related to parent and son dealing with typical struggles.  The audience chuckled hearing that “anyone who has endured the teenage years knows that there is a crisis around every corner”.  As a parent, it was an eye opener to read how different Kevin and Alex’s perspectives were on events.  Reading about Kevin encouraging Alex to become involved in activities to help him have a better childhood experience yet Alex perceiving that his dad was thinking he was not good enough made me ponder some of my own conversations and actions with my children.  It is uncomfortable to think that parents, with the best of intentions can experience situations so differently from their children.

When Alex was ready to come out to his family, he called a family meeting.  Kevin noted that he had an inkling that Alex wanted to talk about his sexuality while his wife Cathy (a “bloody angel” in his words) had no idea.  After coming out, Alex continued to test his dad about his views on homosexuality and seemed to give his dad a series of tests culminating with exposing himself by writing his honest feelings in this book.

“I need a family meeting – in our family, this is code for big shit is going down” 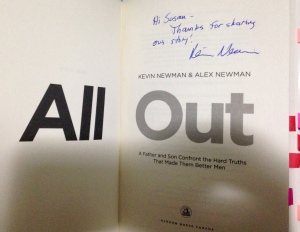 Kevin that he thought that he was too hard on himself.  I would have to agree.  We can all be our worst critics and like they say, hindsight is 20-20.  I appreciated the honesty and candour as Kevin spoke.  He was a comfortable and engaging speaker after his years of experience as a news anchor.  I am very pleased to be the owner of an autographed copy of All Out.

Although Kevin Newman is coming into our living rooms on CTV and W5, he also seems like the dad next door who could listen and provide support for other families with challenges.  I have much respect for this family who have loved and supported each other through many challenges and experiences.