Posted on December 19, 2015 by AYearOfBooksBlog 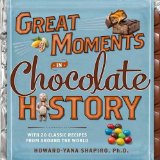 Thanks to my work “Secret Santa”, I have enjoyed learning about the history of chocolate (one of my favourite vices).  This non-fiction book has been published by National Geographic and is full of facts, stories, art and photos.  It finishes with 20 mouth-watering recipes.

The book begins exploring chocolate in the early 1500’s when cacao beans were used as a form of currency.  In 1502 it was reported that Christopher Columbus brought the first cacao beans to Europe.  In the 1600s it was used as medicine and in 1657 England’s first chocolate house (which remains today) was opened.

An interesting fact as we work on our Christmas baking is that the squares of Baker’s chocolate (that we still use today) was formed in 1780.  After studying the leadership skills of Ernest Shackleton during his trip and time being stranded on Antarctica, it was interesting to read about the importance of chocolate  during the voyage.  Another interesting fact is that the first chocolate bars were sold in 1847 and that milk chocolate was developed in Switzerland by Henri Nestle in 1875.  This discovery occurred when he used the powder that had been developed by condensing milk for baby formula.

The 1900s saw the first Hershey bar, Mars Bars (initially called Mar-O-Bars) and Eskimo pies.  These treats were followed by instant pudding, Tollhouse cookies, M&Ms and instant cake.  M&Ms were a portable favourite both during war time and recently during space missions on the International Space Station.

After the year 2000 much work is being done to ensure that cacao beans are grown with stability so that chocolate in its many forms can continue to be enjoyed.

The book finishes with 20 recipes.  My daughter has already bookmarked a number of pages with recipes that she is looking forward to trying.  I did a little baking this afternoon and their are very few double chocolate chip cookies left.  This new recipe was a popular choice with a houseful of kids!

Like Loading...
This entry was posted in Non-Fiction, Uncategorized and tagged Great Moments in Chocolate. Bookmark the permalink.