Posted on November 26, 2015 by AYearOfBooksBlog 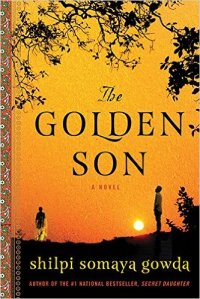 It has been a while since I have read a book that I had difficulty putting down causing me to stay up late reading.  It was refreshing to read The Golden Son which was written by Shilpi Somaya Gowda, author of the terrific book The Secret Daughter.  This author was born and raised in Toronto and now lives in California.

The Golden Son tells the intertwining tales of Anil and Leena.  Although Anil, the eldest son of a traditional Indian family, was expected to take on his father’s role as village arbitrator, his father encouraged him to become a doctor.  His path took him to a hospital in Texas where he became a resident, learning the ways of America and causing him to feel split between the two contrasting countries.

The second storyline described the life of Leena.  She lived in a lower caste but had been friends with Anil when they were children.  Leena’s family negotiated her marriage to a man in another village inadvertently subjecting her to abuse.

As Anil adapted to the fast-paced lifestyle in Texas he felt far removed physically and mentally from the lifestyle in India.  His mother kept close tabs making sure that he remained vegetarian and encouraging an arranged marriage.  He learned the technical style medicine in America yet set up a clinic using basic medical skills when visiting his homeland.

Without sharing too much detail, Anil struggled to arbitrate issues from afar and to determine a solution that would enable him to remain in Texas and please his family.  At the same time, Leena struggled to rebuild her life in India.  This is a fantastic story of family ties, contrasting values, hope and resilience.

It was a very quick read and difficult to put down!  I regret missing the opportunity to meet the author at the Toronto Reference Library event earlier this month.

Like Loading...
This entry was posted in Canadian, Fiction, Uncategorized and tagged Shilpi Somaya Gowda, The Golden Son. Bookmark the permalink.