Posted on November 15, 2015 by AYearOfBooksBlog 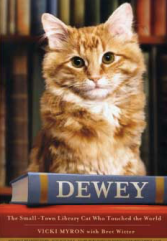 For our upcoming December book club meeting, we sought out a “happy book.”  This was harder than it seemed but one of the options was Dewey (thanks Mara).  Although this orange library cat was quite famous, this heartwarming story was my first introduction to this fabulous feline!

The librarians at the Spencer Library in Iowa arrived, one frigid winter morning, to find a tiny kitten crying between the books in the book drop.  He had frostbitten paws and they discovered that he was orange, not grey, when they gave him a warm bath to heat his little body.  The team fell in love with him and the library board agreed that this kitten could take up residence in the library.

A contest was held to name him and he officially was named Dewey Readmore Books.  No library dollars were used for his care.  Staff donated food for this finicky eater and patrons would bring him toys and presents.  He loved catnip and his red ball of yarn.  He slept on computers, stole (and ate) elastic bands and would hide, jumping out of drawers at the staff.  He intuitively knew who needed him, choosing laps to sleep on and who to rub up against.  He bolstered the spirits of a community that was struggling during an economic downturn which affected the surrounding farm community.

The author shared her own personal challenges – an alcoholic husband, being a single mom, multitude of health problems, the loss of family members – yet she persevered, went back to school and supported her daughter.  She juxtaposed her own challenges with the love she felt for this furry, orange cat who made everyone’s day better.  She referred to herself as “mom” to Dewey who would wave at her as she approached the library each morning.

Dewey had quite a following.  Patrons visited from near and far to meet the library cat, driving many miles out of their way.  He won a photo contest, was highlighted at state library discussion and even had a film crew visit from Japan!

Although it was mainly a happy book, cats only live so long.  Dewey engaged the community of Spencer and others across the world.  He lived until the age of 19 years looking after his library and those who loved him.  The author, Vicki Myron had worked at the library for 25 years and retired after Dewey died to write this memoir.

After reading this book, I think every library needs a cat!!!

Like Loading...
This entry was posted in Book Club, Memoir and tagged Dewey, Library CAt, Vicki Myron. Bookmark the permalink.

2 Responses to 78. Dewey: The Small-Town Library Cat Who Touched the World (Vicki Myron)