Posted on September 16, 2015 by AYearOfBooksBlog 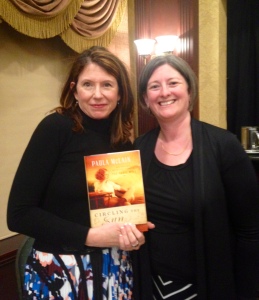 Paula McLain was the first engaging speaker at the 14th annual Grimsby Author’s Series.  This author, from Cleveland, shared that it was the “greatest surprise of my life that I would be the author of  historical fiction” referring to her novels The Paris Wife and Circling the Sun.  McLain captivated the audience as she shared snippets of her own personal experience and spoke of the remarkable women whom she both admired and brought to life for readers.

McLain stated that she was not a “practical woman” and described her experience as a single mother of a 2 year old, going back to school for a Master of Fine Arts in poetry and quitting her job to become a writer.  She described her first novel as “not selling well” and said that reading Ernest Hemingway’s Immoveable Feast “blew my mind“, her curiosity about Hadley becoming an instant obsession as she felt “connected deeply” to her.  The Paris Wife “flew out of my body” as she wrote in a Starbucks, in Cleveland, over a 7 month period.  This book stayed on the New York Times Best Seller list for 77 weeks and McLain said that “it was wonderful but it ruined me because how was I going to find a subject that electrified me like Hadley?”

It took McLain 2 years to “fall in love again” with another strong woman and this happened on vacation when her brother-in-law was reading West with the Night by Beryl Markham.  Markham was a strong woman who was the first individual to fly from East to West across the Atlantic.  McLain marvelled that everyone knows Amelia Earhart yet few have even heard of this remarkable author, pilot and female horse trainer who she descried as a “badass.”  McLain had found her “story that hadn’t been told” and a connection with Markham’s since both their mothers had left them at age 4 and returned 16 years later, Markham living largely unsupervised with her father in Kenya and McLain living in foster care in California.  She described Markham as having a “species of courage that is quite rare” as she “pushed against hurt” and compared her to Icarus who risked too much and flew too close to the sun.  McLain felt priveledged to share these stories or in her words to be “channelling these women.”

When writing historical fiction, McLain uses actual characters, dates and events to weave her stories together.  She described the actual history as the “shape of the stegosaurus bones in the museum” that she uses to support the “flesh, the muscle, the heart and the soul” which she creates.

Following her talk and a short reading of the beginning of her novel, McLain signed books.  She took time to speak to her fans individually and graciously took pictures as well.  I am happy to add The Paris Wife and Circling the Sun to my signed book collection and would like to thank the Grimsby Author Series for a wonderful evening! 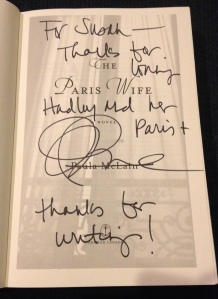 Like Loading...
This entry was posted in Book signing and tagged Beryl Markham, Circling the Sun, Hadley Richardson, Paula McLain, The Paris Wife. Bookmark the permalink.