Posted on January 11, 2015 by AYearOfBooksBlog 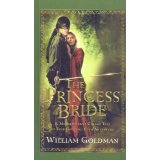 To the surprise of many at our book club meeting, I have never read or seen the movie The Princess Bride which is a tale that many have enjoyed with their families.  I still have not seen the movie but just finished the novel and it was not what i expected.  Essentially, the Princess Bride is a story that is read to a reluctant reader who is ten years old and on bed rest due to pneumonia.  The boy’s father tells the tale as he recovers engaging him in the story and igniting a love of reading adventure stories.  The father describes it to have:

The story has all of that and more!  Years later, when the boy has grown up and has sought out the book for his own son, he realizes that his father had altered the story by avoiding passages that may have been long and tedious and reading only the adventure.  He describes that:

“For the first time in my life, I became actively interested in a book.  Me the sports fanatic, me the game freak, me the only ten-year-old in Illinois with a the on for the alphabet wanted to know what happened next.”

The tale starts with the beautiful young girl, Buttercup, who is bossing around the “farm boy”.  It is not until he is preparing to leave that she understands that his comment “as you wish” means that he loves her.  She realizes that she returns the feelings only to have him leave for America to start a life.  During the trip, Buttercup learns that he has died at the hands of pirates and she chooses never to love again.

The King is dying and the Prince must find a wife.  He ends up asking Buttercup to marry him and knowing that she will never love him, the plans for the union begin, starting a maelstrom of deceit, lies and treachery.  Buttercup is kidnapped by a very intelligent hunchback, a gentle giant of brute strength and a Spanish swordsman with his own grudge that he carries.  The trio absconds with the beautiful girl as they are tracked by the man in the black mask.  As the father quotes (above), the story is full of adventures including all that he promised as Buttercup is “rescued” and slowly realizes how important love is.

If you are looking for a fairy tale that ends nicely, with all the lose ends tied up and a happy ending, this is not the book for you.  I would like to say that I loved it but i admit it I found it a bit slow at times.  I like the idea of a boy becoming engaged in reading but found the story was interrupted continuously, flipping between the present and the story.  I think that I need to watch the movie and hope that I enjoy it more (sorry Mara)!  I am sure that the movie will be quite interesting just because of the dynamic cast including the late Andre the Giant, Robin Wright-Penn, Mandy Patinkin and Billy Crystal.

I am keen to hear what others thought if you have both read the book and the movie… feel free to comment.

Addendum:  My youngest son and I just finished the movie.  Although it had a lot of big name actors, it was very similar to the book.  Brendan shared that he was bored and did not get into the story (maybe he is a bit young).  I liked seeing the actors at a younger age but have to say that I was a bit disappointed after hearing such rave reviews.  Too each his own!

Like Loading...
This entry was posted in Fairytale, Historical Fiction, Made into a Movie and tagged fairy tale, The Princess Bride, William Goldman. Bookmark the permalink.